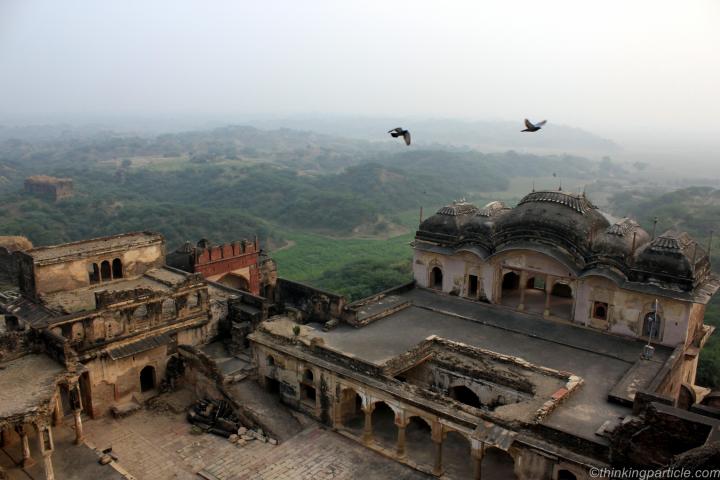 It was three hours after midnight when I arrived at the Phaphund station. The platform was dimly lit and cold. Gunmen accompanied me to a Jeep that drove me to a guesthouse located on the first floor of a local home.

It was located on fabled territory, infused by an urban fear of bandits. A blend of mythical stories, exaggerated security and a steady undercurrent of uncertainty. We had recently secured a large construction contract at the Petrochemical Plant here, that extended the promise of a sharp shift in our destiny. So we waded in with hope and resolve.

As the project progressed, we were looking for a subcontractor to handle the piping work for the facility. A Sardarji met us with strong recommendations.  Discussions with him were underway, when I had a visitor.

I was sitting in a dingy site office when Avinash Pandey was first ushered into the room. His gunmen hovered around the corridor outside.

A few months earlier, a colleague had been escorted from his hotel room to the home of a local strongman. The purpose of that meeting was left ominously unclear. I was told to ensure we did no business with him. He was now in the room before me.

He sat and courteously waited for me to fold away the papers on my desk. He was unlike other locals who sought minor bounties – who waited for the flicker of nervousness in your eyes, to extract a few fleeting months with a steady income. He seemed more patient, wizened by the inevitability of all that we do being eventually undone by time.

He began to introduce himself and his company – Radix Engineering. I tentatively reminded him that the work on our hands was too complex to offer him an assignment. He paused. Beneath the slight bow of his head floated a delicately bruised smile. He had heard I was stationed at site and was only here to meet me, not canvass for work. He was available to help if the need arose was his quiet submission as he prepared to leave.

I asked him to stay for a cup of tea.

As the months progressed, I was relieved by the simple rawness of small towns. Insulated from an urban transactional decorum that soaks the human race in an awkward sickness – where the real and the scripted merge into an affected ordinary.

When the Sardarji was struggling during the finishing stages of the project, after some hesitation, I called Pandey for help. He executed a quick and effective intervention. A future partnership took its first tentative step.

We began to gradually use him for work across the country. When cash-flows were tight and other subcontractors and vendors barged into my room or yelled at me over the phone, he would sit across my table in hopeful dialogue with the shared understanding that suffering is a part of every human effort.

Pandey had an intuitive understanding of the vulnerability of a leader. He believed men must transcend who they were to be trustworthy partners to each other. His men were cemented into a single reflection of what he stood for. It resonated with the way we were. Enabled them to align with us like a chameleon that dissolves into its native environment. Our many oars would row in tandem. And we became friends.

Pandey was on his own epic voyage.

When too many days run at cross purposes to the dreams with which they begin, men become neutral bystanders to their own life. Villages empty out in search of the unknown promises of the modern world.  Pandey dreamt of simple things. Of the day when his children would not rely on the strength of his limbs to survive but on the equilibrium of interdependence that seemed to keep sprawling cities in relative peace.

Nursing the fragile hope of all fathers, that their children will not face the grief and deprivation that made them.

Pandey was the only man to clear the IAS exam from his town. He chose to pass that over to become a contractor. So that he could carry more of his people along with him. A decision that transformed into folklore through the whispers of anxious mothers and stranded middle aged men – searching for inspiration to justify their faith in unseen forces.

Over eight transformative years, he did the hard climb out of the ravines surrounding Phaphund. Built his company Radix into a firm that one could trust with a difficult deadline. He always kept his word. His unwavering poise anchored in the constant memory of a noble mission.

As his reputation grew, he began receiving work from other mainstream contractors. It culminated in a large pipeline subcontract from one of our competitors for a project in Mathura. It was in a region known for political turmoil on the ground and Pandey was required by the main contractor to help navigate their project through that volatile terrain.

The Mathura project ran into multi-fold problems, not of Pandey’s making. It was severely under-priced by the main contractor and as their losses mounted, so did his. Buried in debt and hypnotised by the precise heartlessness of numbers, the main contractor distanced themselves from him to attend to their own challenges.

As the weight of his burdens from that project swelled, he began to lean on work from us again to help him tide over the aftermath. The shine began to dim in his eyes.

To a man in debt, each minute passes waiting in hope for a drop of water from a parched tap to fill a broken bucket. And so a difficult year leaked by, until he got his first major contract directly from an oil company in Jamnagar. There was enough money to be made in it to steady his sinking ship. As the Jamnagar project progressed, the pressure from his old creditors kept growing. He held them at bay with the hopeful patience of a chess player. Energised by the promise of imminent recovery.

Until that fateful day arrived.

A debt resolution meeting had been brokered in Jamnagar by a local politician with one important creditor from the old Mathura project. With Radix’s business still choking for cash, he approached this dialogue with one agenda. To show the transformation underway and request, in good faith, for understanding. But such requests only work for those blessed with the luxury of time and alternatives. When both sides come to the table with limited options, such discussions hit a dead end. They either lead to the courts, or worse.

In this case, it led to a gun fight. The creditors were shot dead and the politician left injured.

Like the swift stroke of a samurai sword, that event reduced Radix into a lifeless corpse – that went still and disappeared back into the ground. An abrupt end to an unfinished story.

Since that fateful day in December, eleven years ago, we have never seen or heard from Pandey.

There were rumours that he migrated with his family to a new location and assumed a fresh identity. That he lives the life of a fugitive, moving from place to place each year, without leaving any footprints of his life. Plotting a stealthy liquidation of the able men around his deceased creditors, until one day he can return back to the defeated doors of his ancestral home, abandoned for years under the wary watch of vultures.

But the assumption that has gained acceptance is that he, his wife, his children and his trusted lieutenants were all killed with the systematic fury of vengeance.

Every brutal battle begins with an everyday incident. This time it was a decision taken in the safe confines of an urban office with its books out of balance. One that cut Radix loose into a snake pit of creditors in an unforgiving belt of the rural heartland. It forced men to seek refuge in the language of their forefathers. The kind that side step the perverse sophistication of slow moving courts and ill-intentioned negotiations.

I recall the earnest calm in his face. Now lined by the liquid shadows – of a long slow dance of unravelling dreams.

A cold blooded murder can begin with a backstory of noble intentions. The compromises on the path to progress enable some and upend others. These frame  the vulnerability of our existence.

In the fleeting stories that animate the world, opposites constantly weigh into each other, in an unstoppable search for the equilibrium of neutrality. Like the temporary life of a gurgling river, hurtling to dissolve into the benign sea.

(This post was also published in ‘The Punch’, a literary magazine on art and culture)

27 thoughts on “The ravines of Phaphund”